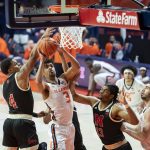 The Nebraska men’s basketball team snapped their five-game losing streak Saturday night with an 78-74 victory over Minnesota at Pinnacle Bank Arena. Five Huskers finished in double figures… Dalano Banton led the way with 14 points and seven rebounds. The Huskers final home game of the season is tonight, they host the Rutgers Scarlet Knights. Tipoff at Pinnacle Bank Arena is set for 6:00.

The Husker women’s game against Michigan State was postponed minutes before tipoff Saturday because of COVID concerns. The Nebraska women close out the regular season Saturday at Iowa. Tipoff will be at 7:00.

The 13th ranked Creighton men’s basketball team’s four-game winning streak was snapped Saturday at Xavier, 77-69. The Jays continue on the road Wednesday with a game at Big East leader Villanova. In their February 13th meeting in Omaha, Creighton topped then 5th ranked Nova, 86-70. Tipoff Wednesday night is at 7:30.

Saturday’s Creighton women’s basketball game against St. John’s in Omaha was cancelled out of an abundance of caution due to an inconclusive COVID-19 test result within the Red Storm program. Creighton is the sixth seed in the Big East Tournament, and will play the 11-seed in the opening round on March 5th. Game time for that contest is scheduled for 4:00.

The Creighton baseball team opened their season this past weekend in Nashville, Tennessee, splitting two games with both Liscomb and Belmont. The Jays will face their crosstown rivals Nebraska-Omaha Friday at 3:00 at UNO’s new baseball facility, Tal Anderson Field.

The UNK basketball teams closed out the regular season Saturday, in St. Joseph, Missouri. The Loper men were edged by Missouri Western State 74-72. They finish the season at 8-14. The nationally ranked Loper women picked up a 66-62 win Saturday. The Loper women will be the third seed in the MIAA Tournament, and will host sixth-seed Pittsburg State (14-8) Wednesday at a time to be announced.

The UNK softball team won all four of their game at the Drury Invitational this weekend. The Lopers have now won six in a row, their longest winning streak in five years, and it’s their first 4-0 February weekend in 15 years. The Lopers are off this weekend before beginning MIAA play at Lincoln and Central Missouri.

Sophomore Brayden Sorensen and redshirt freshman Wes Ferguson won individual titles to lead the UNK track and field team at the 2021 MIAA Indoor Championships Sunday in Topeka, Kansas. Senior Tiara Schmidt won the women’s weight throw title Saturday. The list of NCAA Championship qualifiers will be released early this week. The national meet is set for March 12-3 in Birmingham, Ala.

Joining her on the top of the award stand is Sorensen (Kearney H.S.) in the high jump and Ferguson (Fremont) at 800 meters. The Loper men now have 12 MIAA indoor individual event titles to their credit.

The Tri-City Storm picked up a couple of wins at home this weekend. The topped Fargo Saturday 5-2, and Sioux City yesterday 3-1. The Storm are wrapping up an 8-game homestand with three games this weekend.

Norfolk Public Schools have been placed on probation by the Nebraska School Activities Association after their student section used a racial slur during a Feb. 12th game against the Omaha Northwest girls basketball team. Besides submitting a formal apology letter to the Omaha Public Schools, the district must present an equity and diversity plan to the NSAA Board of Directors in August. If another incident occurs before the end of the school year, the district could be subject to additional sanctions.