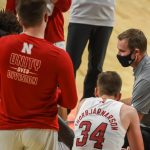 The Nebraska men’s basketball team dominated the Rutgers Scarlet Knights last night at Pinnacle Bank Arena, winning 72-51. The Huskers led by as many as 30 in the second half, and held on down the stretch to record their first back-to-back conference wins of the season. Junior Lat Mayan led three Huskers in double figures with 25 points. The Husker will be looking for a third straight win this Thursday at 5th ranked Iowa. Tipoff will be at 8:00.

University of Nebraska Head Coach Fred Hoiberg announced the departure of junior guard Teddy Allen from the program Monday morning. Allen Tweeted he wants to focus on getting fully healthy in preparation for the next step in his basketball journey. Coach Hoiberg mentioned last week that Allen had been bothered by a wrist issue. Allen was the Huskers’ leading scorer, averaging 16.4 points per game, he scored an arena-record 41 points in a 86-83 loss to Penn State last Tuesday. Nebraska was Allen’s third Division I program. He began his career at West Virginia and was there for one season, transferring to Wichita State in 2018. He sat out the next season per transfer rules and never played a game for the Shockers. He was kicked off the team in June 2019 after he was arrested in connection with a disturbance with his girlfriend. He then moved on to Western Nebraska Community College, where he was the national junior college scoring leader in 2019-20.

The Creighton men’s basketball team has dropped one spot, to 14th in the latest AP Top-25 Poll. The Jays four-game winning streak was snapped this past Saturday at Xavier. Creighton is back in action tomorrow night with a game at Big East leader 10th ranked Villanova. In their February 13th meeting in Omaha, Creighton topped then 5th ranked Nova, 86-70. Tipoff tomorrow night is at 7:30.

The Nebraska Athletic Department has decided to bring its multimedia rights operation in-house. Nebraska’s current deal with Learfield/IMG expires this summer. Nebraska has contracted with Learfield/IMG since 2006 and will retain the company for some services moving forward, but will move its entire multimedia rights operation within the athletic department. Nebraska is believed to be the first Power Five conference school to make this complete of an in-house transition. NU’s contract with Learfield/IMG had been worth $72 million over the past six years and was subject to periodic renegotiation.

There was no change at the top of the latest AVCA Top-25 Poll. Wisconsin remains at the top despite a decision to pause all team activities for two weeks due to COVID issues within the program. Texas is No. 2, followed by Kentucky, Nebraska and Minnesota. Other Big Ten teams ranked this week include Penn State (No. 10), Purdue (No. 11) and Ohio State (No. 19). The Huskers are scheduled to play a pair of matches at Illinois this weekend.

The nationally ranked UNK women’s basketball team will host a first round MIAA Tournament game Wednesday at the Health and Sports Center. The tourney’s third seed, the Lopers will host the sixth-seed Pittsburg State… a tipoff time will be announced soon. The top four tourney seeds are at home Wednesday with the highest remaining seed after the first round hosting the semifinals (March 6th) and finals (March 7th). Wednesday’s UNK/Pittsburg State winner plays either Central Missouri or Washburn on Friday at a time to be determined.