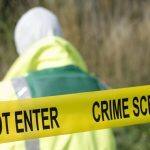 NORTH PLATTE, Neb. (AP) — A Nebraska woman has pleaded not guilty to second-degree murder for the November stabbing death of her live-in boyfriend in North Platte.

Police say it was Saathoff who called 911 on Nov. 12 to report she had stabbed 20-year-old Bryce Wood during an argument.

Arriving officers and medics found Wood lying face down on a bedroom floor in a pool of blood and an 11-inch kitchen knife that police said Saathoff admitted using to stab Wood.