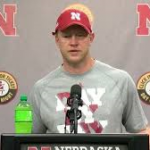 Husker head coach Scott Frost spoke with members of the media Monday. You can find a link to yesterday’s press conference at HUSKERMAX.com. The Huskers are holding the first of 15 spring practices today. The Huskers Spring Game will be played May 1st. Tickets will go on sale this week.

Frost announced that outside linebackers coach Mike Dawson will handle special teams this season, with help from other assistants. Frost said Dawson will handle punt and punt returns, as well as kickoffs and kickoff returns. Offensive line coach Greg Austin will be in charge of field goal protection and Tony Tuioti will handle field goal block.

Frost also said Nebraska is going to release testing numbers this week. Frost said that all but seven players improved in every category in testing. Deontai Williams set the program record in the agility run.

The Nebraska volleyball team has moved up to No. 4 in the latest AVCA Top-25 Poll. Wisconsin is still the top team in the nation, garnering all 60 first place votes. Kentucky is 2nd, followed by Minnesota and Nebraska. Purdue is now ranked 8th, Ohio State is 10th and Penn State is 11th. The Huskers are scheduled to host the 11th ranked Nittany Lions this Thursday and Friday at 8:00.

The UNK women’s basketball team is ranked 9th in the final Women’s Basketball Coaches Association Top 25 poll of the season, and 10th in the final D2 Sports Information Directors of American poll. The MIAA Tournament Champions, the Lopers reached the NCAA Tournament for the first time in a dozen years and advanced to the “Sweet 16” for the third time in program history. Finishing with a record of 23-4, the Lopers had winning streaks of seven and 12 games, respectively.