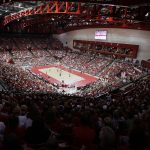 This week’s Nebraska vs. Penn State volleyball matches at the Bob Devaney Sports Center have been canceled. The decision was mutually agreed upon out of an abundance of caution surrounding the health and safety of the student-athletes, coaches and staff relating to COVID-19. The contests will not be rescheduled. The Huskers, 14-2 and ranked No. 4 in the AVCA Poll, will now turn their attention to the NCAA Tournament, which begins April 14th at the CHI Health Center in Omaha. The Division I Women’s Volleyball Selection Show is on Sunday, April 4 at 3 p.m. (CT) on ESPNU. The field of 48 teams will be announced for this season’s championship.

Following a career-high 7.0 shutout innings and 10 strikeouts in Nebraska’s 6-1 series-opening win over Minnesota last Friday, Cade Povich was named Big Ten Pitcher of the Week on Tuesday afternoon. It’s his first player-of-the-week honor, and he is the first Husker pitcher to be tabbed for the award since Nate Fisher on March 11, 2019.

The Nebraska baseball team has announced various schedule updates, including this weekend’s series at Illinois and future home games. Due to forecasted high winds at Illinois Field this weekend, the start time of Nebraska’s games in Champaign, Ill., on Friday and Saturday against Illinois have been adjusted. The Huskers and Illini will now open their series at 6:00 PM (CT) on Friday and Saturday’s game has been moved to 5:00 PM. Sunday’s game will remain at Noon. Now that fans are allowed at Hawks Field, the Huskers have moved the start time of their next three Friday homes games to 6:30 PM. Due to the Red-White Spring Football Game, Nebraska’s game against Rutgers on Saturday, May 1, has been moved to 4:00 PM.

Nebraska signee Bryce McGowens will have one more opportunity to showcase his skills before coming to Lincoln, as the high school senior has been chosen to play in the 2021 Allen Iverson Roundball Classic this May. The first five-star signee in school history, McGowens was named MaxPreps Player of the Year this season as he averaged 21.6 points, 3.7 rebounds and 2.8 assists. A consensus top-25 recruit who is ranked as high as 19th nationally finished his four-year high school career with more than 2,300 points. The Iverson Classic takes place in Memphis, Tenn., on May 7-8, and is the only national all-star game this year, as the McDonald’s All-American Game and The Jordan Brand Classic were both canceled over COVID-related restrictions.