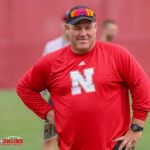 The Husker football team held their second practice of the spring yesterday. Several coaches met with the media after the workout.

Outside linebackers coach Mike Dawson discussed his position group, plus his new role as the special teams coordinator during his session. Dawson said it didn’t take much arm twisting to get him to accept the special teams coordinator role. “When the boss asks you to do a job, you don’t typically say no,” he said. Dawson will be the point person for special teams, with input from Nebraska’s other assistants. Dawson said there aren’t necessarily one or two areas where Nebraska needs to get better on special teams. He said he wants to get better across the board in all areas.

Offensive line coach Greg Austin said the O-line was not where he wanted it to be last year. There’s a big focus on going back to the fundamentals right now. “Schematically, we’re running a lot of the same things. We’re just doing it better. That’s the emphasis.” He added that coach Frost has changed the way they practice, saying “He’s allowed us to really emphasize finishing …. It’s been really cool to see us playing until the end of the whistle with less emphasis on going fast. That’s a big adjustment. You want to get more explosive plays, you’ve got to stick on blocks longer. You can’t stick on blocks if you’re tired as s—.”

Tight ends coach Sean Beckton said that true freshmen Thomas Fidone and James Carnie have been learning plenty since arriving on campus. Carnie will continue to be limited over the next couple weeks after undergoing shoulder surgery in the offseason. One other Husker football note: tight end Kurt Rafdal has opted to enter the transfer portal. The Huskers will return to the practice field tomorrow.

The UNK softball team split their double header with Metro State yesterday in Denver. The Roadrunners won the opener 4-2, but the Lopers bounced back in the nightcap with a 9-1 win. Freshman southpaw Madison Rosenthal tossed a complete game six-hitter to record the victory. The Lopers will play their first home game of the season the Friday, hosting Missouri Southern at Patriot Park. First pitch is set for 2:00.