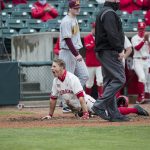 Victor Jones Jr., a three-star wide receiver from Florida, has announced his commitment to the Huskers. The 6-foot-2 185 pound wideout also had offers from Arkansas, Cincinnati, Buffalo, Maryland, Kentucky and Central Florida. He joins 3-star linebacker Ernest Hausmann in the Huskers’ 2022 recruiting class. The Husker football team is holding their third practice of the spring this morning. The Red-White Spring game is set for Saturday, May 1st.

Following a four-game sweep of Minnesota last weekend at Hawks Field, the Nebraska baseball team is on the road this weekend for a three-game series at Illinois. The Husker are riding a six-game winning streak heading into today’s series opener, which is set for 6:00 start. Saturday’s game begins at 5:00, the series wraps up Sunday at Noon.

The Nebraska softball team travels to Piscataway, N.J., this weekend for a four-game Big Ten Conference series with the Rutgers Scarlet Knights. The teams will open the series with a single game today at 2:00. The two teams will play a doubleheader tomorrow at Noon. The series finale is set for Sunday morning at 10:00.

The 4th ranked Nebraska volleyball team will be watching the Division I Selection Show, Sunday at 3:00 on ESPNU. This year’s tourney will feature 48 teams competing for a National Championship at the CHI Health Center in Omaha. The tourney begins April 14th with the first round, the second round will be played the next day. After a two-day break, the regional semifinals and finals will be played on April 18-19. The NCAA Semifinals are set for Thursday, April 22, and the NCAA Championship will be on Saturday, April 24.

The UNK softball team will play their first home games of the season this weekend at Patriot Park. They host Missouri Southern today in a doubleheader starting at 2:00. They have a doubleheader with Pittsburg State tomorrow at noon.

The Tri-City Storm opened a four game road swing last night with a 5-1 win at Des Moines. The Storm travels to South Dakota this weekend for a pair games in Sioux Falls.