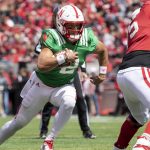 Husker coaches and players on offense met the press after Monday’s practice, their fourth of the spring. Quarterbacks coach Mario Verduzco, running backs coach Ryan Held, quarterback Adrian Martinez, wideout Levi Falck, tight end Travis Vokolek, and linemen Bryce Benhart and Turner Corcoran all spoke with the media after the workout. They all talked about a renewed emphasis on ball security.

Coach Verduzco said the message to the offense is, “take care of the damn football.” Martinez said he likes where he’s at from an interception standpoint, but said he still needs to work on ball security, admitting his fumbles have hurt the team in the past. Coach Held said players have to “pay rent” after practice for fumbles, doing pushups and other various strenuous activities.

You can find links to Monday’s interviews at HUSKERMAX.com. The Red-White Spring game is set for Saturday, May 1st.

UNK redshirt freshman Joseph Reimers has been named the 2021 Super Region VI “Rookie of the Year” by the National Wrestling Coaches Association (NWCA). Reimers was one of nine Lopers to earn All-American honors this year, placing fourth at 197 pounds. He finished his first year with a 16-4 mark which included six falls, four tech falls and a major. Off the mat he carries a 3.56 cumulative grade point average as a Physician Assistant major. Upper Iowa’s Zach Ryg, who bested Reimers in the NCAA third place match, was named the National Rookie of the Year.