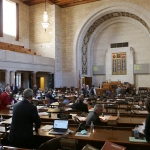 OMAHA, Neb. (AP) — Local governments that want to get a boost in property tax revenue would have to send postcards to notify all of their taxpayers and hold a standalone public hearing where residents could voice their opinion under a bill backed by Nebraska lawmakers.

Lawmakers gave the measure first-round approval Wednesday with a 36-1 vote.

The bill would apply to cities, counties, school districts and community colleges that want to collect more tax revenue than they did in the previous year.

It comes as Nebraska lawmakers attempt to clamp down on rising property taxes, a frequent complaint among residents.

Property taxes are levied by local governments, but many state lawmakers say they hear complaints constantly about local tax bills.